**This sample tour is based on travel to Israel and adding both Jordan & Egypt. If you would like to add only Jordan or only Egypt, we can customize that for you!**

For the ultimate experience of seeing the Bible come to life, this 16 day adventure into three countries will give you a full depiction of the Old Testament; from Moses leading his people away from Egypt and into Israel, all the way to the New Testament visiting the sites that are mentioned in the Bible…from the Book of Genesis to the Book of Revelation. The extensions into Jordan and Egypt offer sites and experiences that give you a further taste of life in the Bible and enhances your growth in your faith which ultimately ties directly into your Israel experience. After landing at Ben Gurion Airport, reception and assistance, we drive to our hotel for check in. Welcome dinner and orientation session. 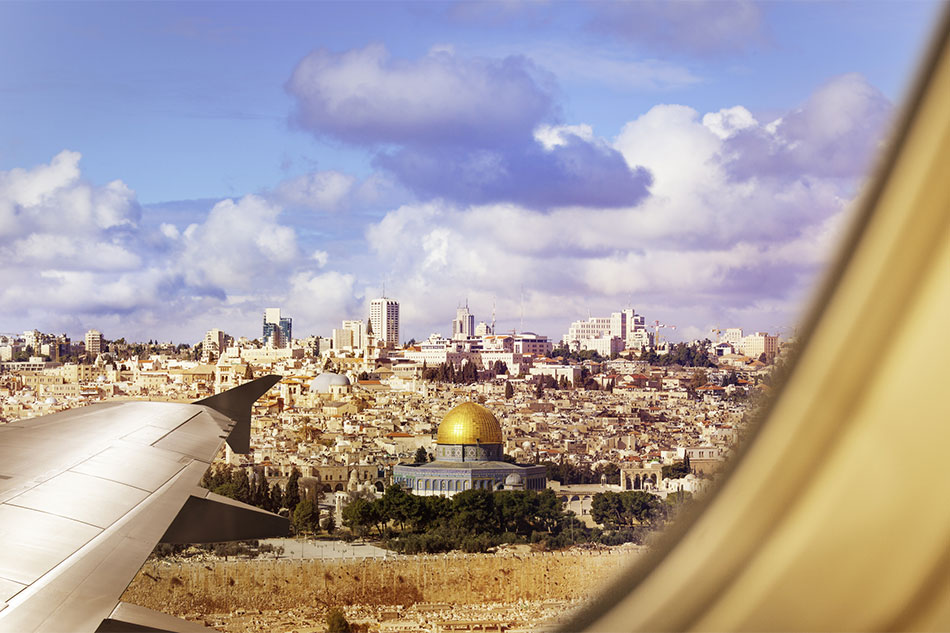 We begin the first day of the tour with a visit to the ancient Herodian port of Caesarea (Acts 8:40), with its 2,000-year-old amphitheater, impressive ruins and remains of the port where Paul sailed off to Rome on his last missionary journey, after having being imprisoned on site for two years. We’ll drive and tour the fortress city of Megiddo (Joshua 12:21), the biblical Armageddon. Excavations at the site have revealed over 20 levels of ancient civilization, and a magnificent water system. Continue to Mt. Carmel (1 King 18:16), overlooking the Valley of Armageddon where Elijah battled the Gods of Baal.

In the afternoon we will drive through Jesus’ childhood home of Nazareth with a stop from the amazing Mount Precipice overlooking the Jezreel Valley. From there we head to head to Cana. Celebrated as the scene of Jesus’ first miracle, Cana is actually the place of his first two public miracles in Galilee — the changing of water into wine at the wedding feast and the remote healing of an official’s son in Capernaum (John 4:46-54). The rest of the day is spent with free time, exploring, and relaxing in historic Haifa, a picturesque town perched above the coast. (Boat tour in the Sea of Galilee)

We begin the day by discovering the remains of a 2,000-year-old fishing boat known as “The Jesus Boat” at the Yigal Alon Museum. We then make our way north towards the Golan Heights, above the Sea of Galilee (Matthew 14:25) and on the Syrian border. Continuing onto the springs and archeological site of Caesarea Philippi (Matthew 16:13) we will remember the Lord’s question to His disciples, “Who do you say that I am?” From there we drive to nearby Tel Dan, site of Jeroboam’s Biblical altar. We end our day with a breathtaking spiritual journey, sailing on a wooden boat on the Sea of Galilee.

Today we visit the Mount of the Beatitudes (Matthew 5:1-12), where the “Sermon on the Mount” was delivered. Continue to Capernaum (Matthew 4:13), a fishing village on the shores of the Sea of Galilee and where Jesus preached and healed. We travel to the site of Magdala (Luke 8:1-3), traditionally the home of Mary Magdalene, and where one of the oldest synagogues in the region has been recently excavated. The town was a religious, cultural and economic center in the time of Jesus. Visit the Yardenit Baptismal site, where the Sea of Galilee empties into the Jordan River. Robes and changing facilities are provided for those wishing to be baptized. Day Seven: The Galilee to Jordan

We start the day up to visit the Biblical city of Beit She’an (1 Samuel 31:10-12), mentioned in the Bible several times and best known as the site where King Saul and his sons were hanged from the city walls. The city remained a significant metropolis during the reign of King David and King Solomon. Then we head to the Sheikh Hussein Border Crossing and complete border procedures between Israel and Jordan. Here you’ll meet with your Jordanian Tour guide and experience the ancient city of Jerash, considered one of the largest and most well preserved sites of Roman architecture in the world outside of Italy. Drive to Amman (Numbers 20:14-21), known as Philadelphia in Hellenistic times and reduced to a forgotten village until it became Jordan’s capital in 1921.

Spend the entire day traveling and exploring the city of Petra, built by the Nabataean empire in the first century B.C. The Nabateans carved beautiful structures and buildings into pink and red sandstone canyon walls, creating a breathtaking city that was a center for trade for about 500 years. The city remained hidden and empty for many centuries until Swiss explorer John Lewis Burckhardt rediscovered it in 1812. Start the day early with a drive to the early Byzantine church of Saint George in Madaba (Numbers 21:30), site of the world famous Madaba Mosaic Map. It was during the 6th century that an unknown artist created what is now known today as the oldest known map of the Holy Land on the floor of a Byzantine cathedral. Continue to Mount Nebo (Deuteronomy 34:1-5), the site where the Old Testament says Moses lived out his final days and saw the Promised Land, which he would never enter. Return to Israel via the Allenby Bridge Border Crossing and complete border procedures between Jordan and Israel. Before driving to our hotel for the evening we stop at Qumran, at the foot of the vertical cliff of the Judean Desert, the location where the Dead Sea Scrolls were discovered.

-Overnight on the Dead Sea

Begin the morning with an ascent up the mountaintop fortress of Masada by cable car. Tour Herod’s palace and learn of the Jewish zealot’s final stand against the mighty Roman Army. You’ll then hike the Oasis of Ein Gedi to the hidden waterfall where David took shelter during his pre-kingdom days. Travel to Jerusalem and view the city for the first time from the Mount of Olives (Matthew 24:3), with its panoramic view of Old and New Jerusalem. Descend the Palm Sunday Road to the Garden of Gethsemane (Luke 22:40) for prayer and meditation under the olive trees which have been around since the times of Jesus. Visit to the Garden Tomb (John 19:38-42), located in the heart of historic Jerusalem, just outside the Old City walls. On site there is an ancient Jewish tomb which many believe is the site of Jesus’ burial and resurrection. We will walk along the Way of the Cross, visiting the Church of St. Anne and the Pool of Bethesda (John 5:2-9). We will also visit the Church of the Holy Sepulcher, the site of the crucifixion before ending the day with a visit to the Upper Room (Mark 14:15), where Jesus broke bread with his disciples.

Today we visit Temple Mount (Genesis 22:2), where Jewish tradition holds that it is the site where God gathered dust to create Adam and where Abraham was going to sacrifice Isaac. We then go under the Old City on the Western Wall Tunnels Tour, allowing visitors to reach the segments of the Wall hidden from view, and to walk through ancient and fascinating subterranean spaces with exquisite archeological findings. We will travel back to the beginnings of the city at the City of David site where ongoing excavations are revealing thousands of years of history, including Hezekiah’s tunnel. Continue to the Southern Steps, where pilgrims ascended to the Temple in the time of Jesus. We’ll end the day with a visit to the Holocaust Memorial Museum at Yad Vashem, Israel’s official memorial dedicated to the lives lost during World War II. Today we wake up and transfer to the airport for the flight to Cairo. Land in Cairo and meet your guide. We begin the Egyptian experience with an afternoon tour of the pyramids at Giza, on the outskirts of Cairo. Several of the Giza pyramids are counted among the largest structures ever built. This complex is only one of the Seven Wonders of the Ancient World still in existence. Stop by a papyrus factory before enjoying a panoramic view of Cairo.

Today we will wake up and fly to Luxor. We begin our visit with a drive to the Valley of the Kings, a burial site in the mountains where many ancient pharaohs’ tombs (including King Tutankhamun) were found. We will also see the temple of Hatshepsut where decades of archeological digs un-earthed ancient ruins and beautifully created hieroglyphs. We stop by the Colossi of Memnon to view 2 sixty-foot statues built for Amenhotep II before crossing to the East Bank. Our day ends visiting the temple of Karnak and the temple of Luxor. Both temples were built for kings of Ancient Egypt over many centuries, and the cities show the incredible ingenuity and artistry done by the Egyptians with structures as early as 3000 B.C. Luxor, also known as the ancient city of Thebes (Jeremiah 46:25), was the original capital of Upper Egypt during the New Kingdom. We will fly back to Cairo in the evening. (The City of Cairo)

On your last day most of the morning and afternoon we will have free time at your leisure. Then we’ll visit the Egyptian Museum of Antiquities, which contains many important pieces of ancient Egyptian history, including the world’s largest collection of Pharaonic antiquities. The most well-known is the famous golden mask of King Tutankhamun (King Tut) and his exhibit of treasures and artifacts. Take a stroll through the Khan El Khalil Bazaars in the historic center of Cairo. The bazaar is home to many Egyptian artisans and workshops involved in the production of traditional crafts and souvenirs. Farewell dinner followed by a departure for the airport and the flight back home!